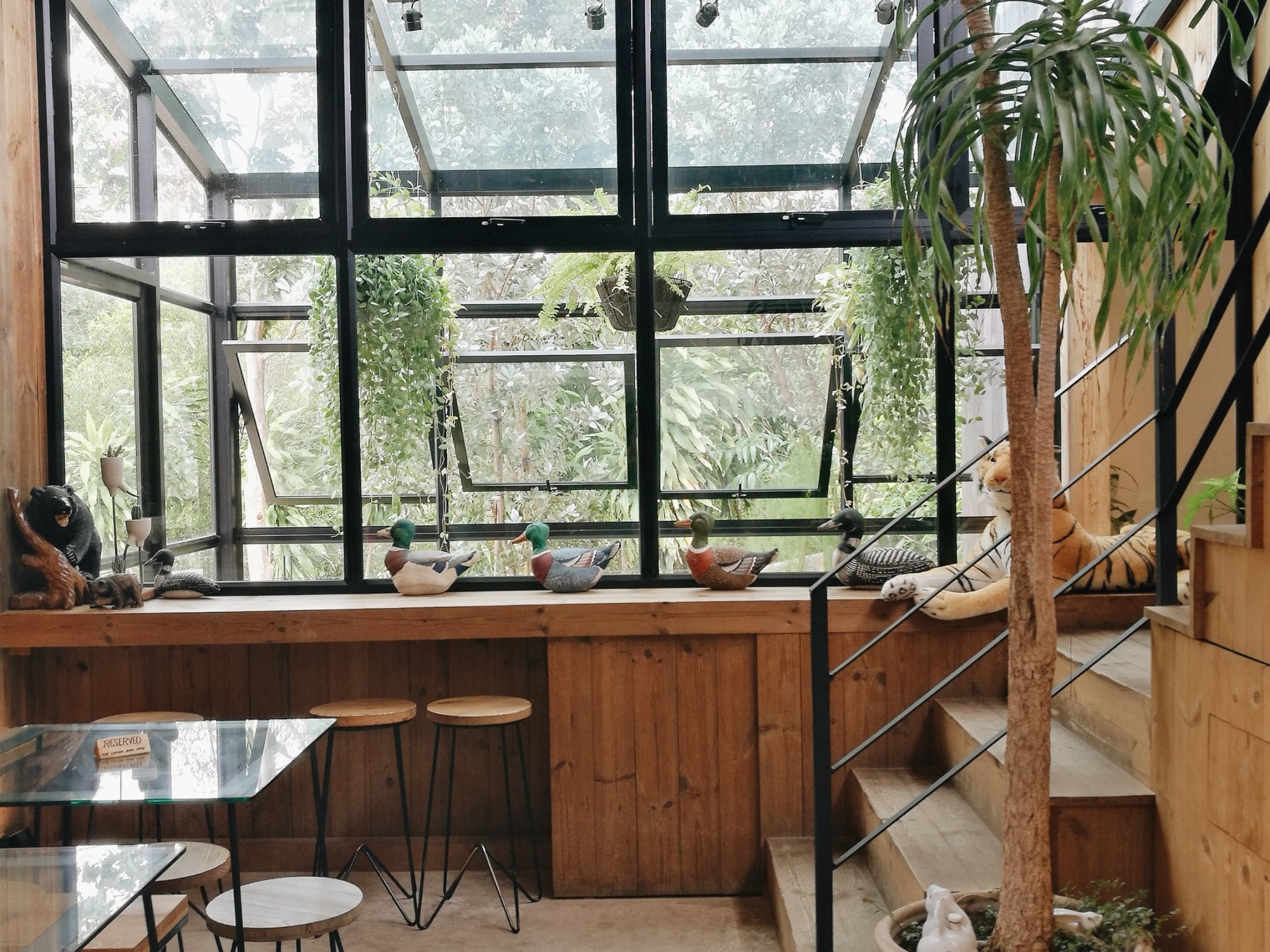 We hired a personal driver to take us around the different sites in Khao Yai and prior our trip I asked him for recommendations on where to eat with vegetarian options. He listed a few restaurants and I chose Birder’s Lodge because it’s near the other places we were going to.

From the Bloom, it was a bit of a drive going to Birder’s Lodge. Same with the other attractions we went to – except for PB Winery, there was no one there when we arrived. I even thought it was closed.

That restaurant was so Instagrammable! Since there was no one there, there are plenty of great picture opportunities that I didn’t take advantage of because I’m bad at posing and having pictures of me taken.

We got seats at the second floor which is basically just one huge table all to ourselves.

I don’t remember the food choices anymore but they offer Western food. We weren’t really that hungry so we just got a margherita pizza and fries — so much for my vegetarian requirement.

We had a very peaceful and quick lunch there. The place felt really homey, and since it’s just the two of us there was a lot of privacy, but I feel like even if there are a lot of people in, it will still feel cozy and homey.

The pizza was really good because of how it was made, and it was only around THB 200-250. We didn’t try anything else so I don’t think it’s proper for me to comment on the food, but the menu is certainly priced just like your average restaurant — no dual pricing!

The outside is just as nice. Just like the rest of the places in Khao Yai, they’re kind of one attraction that you pass by and then it will just be grass and trees in the next few areas.

Like I mentioned, apart from PB Winery, everywhere else we went to in was deserted or barely had any people. It could be because we went on a weekday, or maybe we just went to areas that doesn’t attract locals that much.

Khao Yai is about a 2 to 3 hour ride away from Bangkok. It’s past Ayutthaya, and it’s home to the Khao Yai National Park which will have taken a day to hike.

What I would say the best attraction that place has is the weather. Except for Chiang Mai, this is probably the coldest I have been to. For most part of the ride, we didn’t need to turn on the AC in the car because we opted to open the windows for fresh air. The weather back in Bangkok was slightly rainy but it was that typical 25C – 28C but in Khao Yai, it was much lower, almost 20C.

Khao Yai is a perfect day trip outside of Bangkok if you want somewhere that isn’t really filled with tourists. The downside is they offer more Western looking attractions. I would recommend staying two days there, because I’ve read how good to hike it is around the National Park. It’s not my personal preference so I didn’t go, but I think next time I would try it.

The reason we got a personal car is that most attractions are far apart and there doesn’t seem to have much public transportation — at least not as accessible as Bangkok. I hired a whole service car which cost me THB 3,500 already inclusive of the toll fees, parking, and gas. Some packages will cost more depending on which attractions you want to go to. The fee is from pick-up in our condo in Bangkok to Khao Yai and back. We left Bangkok at 7 AM and got back home just around 5 PM right before the rush hour.

We booked our trip with Jerry. He is easily reachable via WhatsApp or even Facebook (KhaoYai – Pakchong TAXI). His rates are already published and he speaks English extremely well. Highly recommended and very safe! Unfortunately his Facebook’s last post is in January 2019, but best to still leave a message if he is still offering his services.

*Note: I went here in 2017 and realized I never talked about it. It’s one of the prettiest restaurants I have been to! Someone I follow on Instagram recently went here and I’m happy to see that the tiger is still alive.

Always with a headband on. View all posts by Hedda